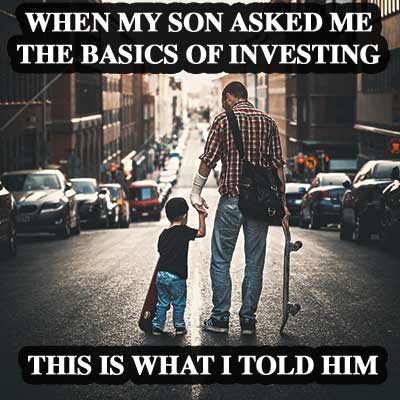 When My Son Asked Me About Investing, Here Are The Four Things I Taught Him…

My son’s old enough now to have asked me, “Dad, how does this investing thing work?”

Investing – What a beautiful thing! What a generous, sacrificial thing to do. If it were up to me, I’d have every single person invest a certain portion of their paycheck in a well hedged portfolio. Mandatory investments would be way better than mandatory taxes.

But all that’s not up to me.

Nevertheless, my own son is not going to be one of them. Ever since he started making sense of things… and started wanted things for himself… I have taught him the value of earning and saving.

Now, let’s not have any misconceptions. When I say saving, I don’t necessarily mean putting money in a bank account. And earning a meager interest that can never ever hope to beat inflation. That’s not what I mean by saving, and I would never recommend that to a friend, a relative or a client. Or my son. Especially my son.

And yet, even putting money in the bank is a much more superior move than squandering it on things we do not need. And by the way, if this makes you feel uncomfortable, good. Either you’ll leave this article for good, and continue squandering, or you will start thinking about what you can do differently. If you agree with me though, then welcome. You are exactly who I wrote this piece for…

As I was saying, I have taught him the value of earning, pulling his own weight, and building up a capital. Yes, that’s what I mean by saving… Building up a capital. You see, we do live in a capitalistic world. And it really helps to have a capital to make things happen. Things of significance. And I have ensured that my son understands this.

I made him work for his toys.

Now, some people call me a horrible father. After all, I had the money. Yet for every toy that my son ever got, he had to work hard.

Now, obviously, I didn’t make a nine-year-old work on a construction site. That would be horrible. But I didn’t just buy him a guitar when he wanted one. I made him read out a whole book to me – and explain the meaning and implications to me. Then I asked him relevant questions. Which lead to counter questioning from him. And we had healthy debate for weeks, sometimes months… as I taught my son things other kids twice his age don’t understand. In fact, I am rather proud that today he understands what most adults don’t. And he’s got more street smarts than a classroom full of Fine Arts majors put together. Physical activity in terms of sports or exercise got rewarded too.

I basically (intermittently) rewarded him for doing everything the right way. And punished him much more instantly for bad behavior. If he ever gets caught smoking, which he hasn’t done yet, he’ll owe me a thousand dollars.

Afterall, I am still the father – no matter how smart he’s gotten. And he still lives under my roof. So I make the laws.

Back to the story…

In other words, while I gave him suggestions, my son has always been free to do whatever he wanted with his money.

Pretty soon he learned the value of saving. Quite naturally, he didn’t want to have to read a new book everytime he wanted something big.

He’d earn money by doing things that we wanted him to do. A dollar for brushing his teeth twice a day… two dollars for finishing up his homework… fifty cents for making up his bed… a quarter for showering on time.

And when he started playing the violin somewhat seriously (yes, his passion guitar was short lived, and he has to buy his violins with more of his own hard earned money) I started paying him for practicing. For each hour that he practiced, I’d pay him two dollars.

By the time he was thirteen, his capital would put most adults’ bank accounts to shame. And I have never paid him exorbitant sums either.

Incidentally, I was myself thirteen years old when I did my first big business transaction.

Once he had all this money, he wanted advice about what to do with it. I’ve drilled it into his head that putting money in a bank account is basically murdering your own capital. And that the capital must be deployed elsewhere. Consequently I started teaching him the basics of investing.

Boiled down, there are four principles that he must adhere to all his life.

No matter what the economic conditions might be… no matter what kind of a turmoil the world might be going through… as long as he follows these four principles, he’ll be safe financially.

Without further ado, I want to present these four principles to you in a concise manner.

However, to get them, you must opt in. What that means is this – I will send you emails with educational and interesting stories. I will also make relevant offers to from time to time.

Now, you are absolutely free to unsubscribe immediately after reading the four principles. I really don’t want to bother you if you’d rather not hear from me. But the emails I send are valuable, and entertaining. And I’d rather stay in touch with you, if you agree.

So fill out this form, and I will send you the four principles directly to your inbox within 3 minutes.

I’ll see you inside
Lakshay Behl

P.S. Now that my son has a bankroll, or a capital, or a respectable amount of savings… he wants to invest. And he’s asked me how to avoid the biggest mistakes that investors make.

I have therefore taught him four principles that will make him nearly invincible to financial crises of the world. I’d like to share those principles of investing with you. Just tell me where to send those to you, and I will send an email to you with the article in it.

It's January 15, 2023. A plane has crashed in Nepal. Last count, 40 people have been found dead, with the toll rising with each passing hour. While millions of condolent…
READ THE ENTIRE ARTICLE
0 0 0